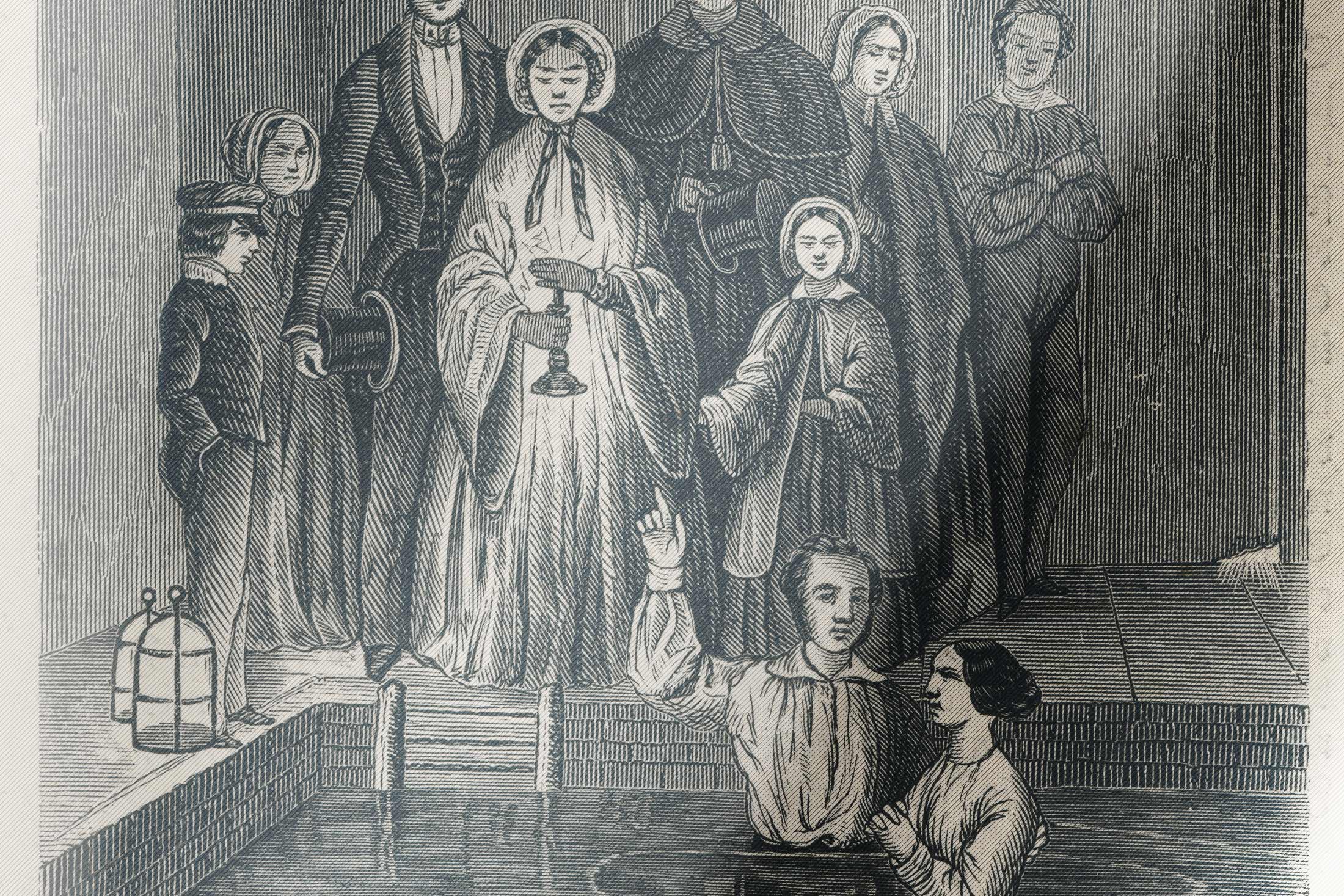 When conversing with Mormon missionaries, the subject of proxy baptism (baptism for the dead) may arise. In summary, this is a sacred practice in the Church of Jesus Christ of Latter-Day Saints (LDS Church) where baptized members routinely go to their local temple and are baptized by a temple worker so that those who have died without being baptized in the LDS Church may be able to use this to their advantage in the afterlife. Although this practice may seem strange to outsiders, it is one of the most important duties members carry out.

An example of why members of the LDS Church care so deeply about this practice is in the words of Elder D. Todd Christofferson, one of the Church’s 12 Apostles: “Christian theologians have long wrestled with the question, what is the destiny of the billions who have lived and died with no knowledge of Jesus? With the Restoration of the gospel of Jesus Christ has come the understanding of how the unbaptized dead are redeemed and how God can be a perfect, just God, and a merciful God also”. According to Christofferson, without proxy baptisms, the unbaptized dead are unable to be redeemed. This is because, according to the LDS Church, baptism is necessary for spiritual rebirth and the indwelling of the Holy Spirit. So, you can understand how important baptism is to Mormons. In their minds, these baptisms are not just blessing the dead; they are saving the dead. Although this might seem alarming, you might be surprised to find them also claim that this doctrine comes from the Bible.

It is enough for all this to be in LDS scriptures, but the missionaries will insist that this sacred practice is mentioned in the New Testament. They will direct you to 1Corinthians 15:29 and there, in plain English, you will read what seems to prove their point: “Otherwise, what do people mean by being baptized on behalf of the dead? If the dead are not raised at all, why are people baptized on their behalf?” (ESV). What is difficult to get around is just how perfectly these words seem to fit the LDS narrative. You may ask yourself how so many scholars, pastors, teachers, or Bible-reading people miss it? How have you read 1Cor 15:29 so many times and never noticed Paul’s reference to proxy baptism?

When he was a teenager, my brother David thought it was funny to tell his gullible friends that stop signs with white borders were “optional”. As a result, his advice informed the way they interpreted a stop sign. World-view is a powerful thing. Norman Geisler said that world-view “is the framework through which or by which one makes sense of the data of life.”. This is why people with different backgrounds can read the same words and come away with a different interpretation. The reason why people don’t see what the Mormon sees in 1Cor 15:29, is because the idea of proxy baptism must be introduced to your “framework” before you read that verse. The doctrine of proxy baptism informs Mormons how to interpret 1Cor 15:29, not the other way around. But how can we be sure 1Cor 15:29 was not interpreted by the early Church the same way Mormons interpret it?

If proxy baptism were truly an early Christian practice, it seems no one ever wrote about it. While the ordinance of Baptism and the Lord’s Table are clearly represented in the New Testament, the notion of people being baptized on the account of a dead relative or friend is not found in any New Testament scripture, nor in the writing of any church father. This interpretation cannot even be evidenced in the writing of any early heretics. With thousands of fragments of writing discovered, this one doctrine, which according to the forementioned Apostle Christofferson, is how God vindicates himself as “a perfect, just God, and a merciful God also” was somehow either erased from every corner of the world, or no one thought to write it down at all. All the evidence we have suggests that Joseph Smith was the first person to interpret this verse as he did. Of course, to say that Smith was the first person who came away with a different meaning to 1 Cor 15:29 would also be untrue.

David Brattson’s research found that Clement of Alexandria wrote specifically about the early heresy of Gnosticism. Accordingly, the Gnostics came away with a different interpretation to Paul’s writing early in Christianity’s history. Their interpretation of this verse was that “the dead” was in reference to living humans, and those being baptized on their behalf were angels being baptized in heaven. Although some Bible commentators claim that the early heretic Marcion taught that people could be baptized on the behalf of others, there are little to no record of his actual teaching and Irenaeus and Tertullian seem to indicate that his teaching was synonymous with Gnosticism and therefore, it is just as valid that he could have believed the same thing about angelic baptism as his Gnostic contemporaries. Joseph Smith was not the first to come away with a different interpretation to this verse, and likely will not be the last. Of course, there still remains the possibility that Smith was the only person who got what Paul said right.

Perhaps this verse was never fully known until it was revealed to Joseph Smith. The case could be made that since different meanings to this verse were disputed when the Church was young, perhaps the meaning could have been unknowable, and therefore it was necessary for God to reveal it to Joseph. This is an argument made by BYU Professor Robert Millet when he concluded “…both the doctrine of salvation for the dead and the ordinance of baptism for the dead, of which we have but an allusion in Paul’s letter to the former-day Saints, have been revealed and restored in our own dispensation.”But there is a better reason to explain why this verse was mishandled early in Church history as well as today.

The meaning of 1Corinthians 15:29 is not plainly obvious. According to Dr. John MacArthur, there are between 40 and 400 interpretations of this one verse and many of them are perfectly acceptable interpretations. If you have spent any time studying the Paulin Epistles, you would agree with Peter that “there are some things in them that are hard to understand” (2 Pt 3:16, ESV). To be frankly honest, taken all by itself, the Mormon interpretation seems to be the most obvious.  Fortunately, we have the rest of the chapter for some clarity and this becomes a shining example of why context matters. Christians being baptized on behalf of the dead does not fit the context of this chapter, it does not fit the context of Paul’s beliefs, and it does not fit what Jesus taught.

The theme of 1 Cor 15 is the essential reality of Christ’s resurrection. The challenge to this theme is in verse 12: “Now if Christ is proclaimed as raised from the dead, how can some of you say that there is no resurrection of the dead?” (ESV). Paul goes on to make the argument that if resurrection is a lie, then our faith is pointless (v 17). Contextually, every reference to the dead in Chapter 15 is a reference to dead believers. This is made most obvious in verses 22 and 23: “For as in Adam all die, so also in Christ shall all be made alive. But each in his own order: Christ the firstfruits, then at his coming those who belong to Christ.” (ESV). So, it flows in context that since the dead are in reference to dead Christians in verses 6, 12, 13, 15, 16, 18, 20, and 21, the “dead” in verse 29 would also refer to dead believers since Paul never makes a distinction to the contrary. Even if the dead in verse 29 were in reference to unbelievers, the likelihood that baptism was necessary for salvation would not be consistent with Paul’s soteriology.

According to Paul’s letter to the Ephesians, salvation is the result of God’s grace through faith. Salvation is not the result of works, rather works are the result of salvation (Eph 2:8-10). Baptism is a good and necessary work for saved people, but for Paul to teach that this work was necessary for salvation, would be a contradiction to his soteriology. Not only would it be against Paul’s beliefs about how people are saved, but baptismal regeneration can also be considered anti-Christ.

At no time in Jesus’ ministry, according to the Gospels, did Jesus once emphasize baptism as a means of salvation. The only prescription for salvation, according to Jesus, was that people believe (Jn 5:24, 6:29, 40, 47, 8:24). The whole point of the gospel of John was for people to believe in Jesus for salvation (Jn 20:30). Before Jesus ascended, he commissioned the believers in Matthew 28:19 to make disciples, baptize disciples and teach disciples. Disciples of Jesus are made when they believe the Gospel. According to J. Dwight Pentecost, this point is made even more clear when reading Mark 16:16 where it is clear that salvation is attached to belief and condemnation is attached to unbelief. Baptism is in close proximity to belief, but this is likely because it is the first step of obedience. So, based on the context of the Chapter, the writer, and the Lord Jesus, we know 1Cor 15:29 cannot possibly mean what the LDS Church interprets it to mean. So, what does it mean? Let us untwist it as simply as possible so that the interpretation can be understood more clearly.

Where this verse gets twisted is in the assumption that the dead are in reference to dead unbelievers in need of baptism. This twist lends to the assumption that the people being baptized are already baptized and are being rebaptized “on their behalf”. But if we take the dead to be in reference to believers (like the rest of the chapter), and the baptized to mean people being baptized as Christians for the first time (like they are in the rest of the New Testament), we come away with a more likely interpretation, especially in the context of the theme of Chapter 15.

Since Paul is arguing the essential truth of the resurrection (both of Christ and those in Christ), the rhetorical question he asks is that if resurrection is not expected, why would anyone be baptized as a Christian? Paul is making an appeal to reason by asking why anyone in their right mind would be baptized into Christ if the dead (who are Christian) are not raised. In the words of John MacArthur, “When the grave is the end, the incentive for salvation is lost”. Paul’s subsequent points takes shape in this light since a life of trial would be meaningless if the dead in Christ are not raised (v 30-32).

If then, the dead in verse 29 are the sleeping Saints in verse 6, why would anyone be baptized if there is no resurrection? As with all rhetorical questions, the answer is obvious. They wouldn’t. Resurrection is the ultimate reason to become a Christian, so if the dead are not raised, dead Christians are reason enough for us to avoid Christianity altogether. But people are baptized on their behalf because all who are in Christ are raised from the grave.

Christofferson, D. Todd. "Why Do We Baptize for the Dead." General Conference Address. Salt Lake City: The Church of Jesus Christ of Latter Day Saints, 2000. 1.

Pentecost, J Dwight. The Words and Works of Jesus Christ A Study of the Life of Christ. Grand Rapids, Michighan: Academie Books, 1981.